Rift in the Races Audiobook Is Now Available 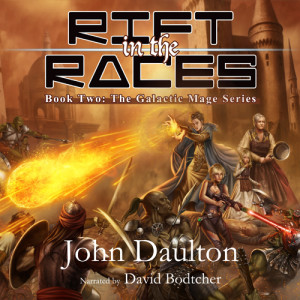 The Rift in the Races audio book is now available on Audible.com. It will be up shortly on Amazon and iTunes as well, they just take longer to process. Woot! Go get one, and buy like twenty more and give them to your friends. If you have a hundred friends, that’s even better.

Seriously though, it’s out, so I’m super stoked. As you can see, I had to mess with the cover from the novel a little, but I’m very happy with how it came out. And now, finally, after months of work, it’s ready and launched out into the interwebs. I’ve linked an audio sample at the bottom so you can be thoroughly enticed. The narrator is so good, it’s like fantasy/sci-fi foreplay for your ears and brain.

If you out there who enjoy a good listen in your car, at work, exercising, working in the yard or just laying around … The Rift in the Races audio book is a whopping 29 hours and change, making it an awesome entertainment value (lol, I sound like a salesman now). But I’m serious. Think about it, the Hobbit movies are coming in at around two and a half hours each, so you’ll only get eight or nine hours of those, for way more money by the time you buy all three. Even if you add in the length of the first three LotR movies, you’re still not getting the same amount of time in fantasy land as you get with JUST Rift in the Races. Then, if you also count book one, The Galactic Mage audio book, and BAM, you’re at almost fifty hours of fantasy and sci-fi as opposed to eighteen hours tops with the movies.

Now obviously I’m not saying you shouldn’t buy those movies too; I know I have the first Hobbit one, and all the Lord of the Rings ones too. I watch them all the time. But what I am saying is, you can get a whole lot of fantasy escapism for the price of the audio books. And you can’t watch movies in your car. Well, you can, but you shouldn’t for obvious reasons.

David Bodtcher, the uber narrator who did the first audio book, The Galactic Mage, has done a marvelous job breathing life into the characters in this epic tale. The range of the man’s vocal acting is just awesome to listen to (I did mention I am linking a sample at the bottom, right?), and I know readers and listeners are going to love what he’s done.

David has just started work on the third audio book in the series and is reading through Hostiles now, working out voices for some of the newer characters. I’m especially excited to hear what he comes up with for Gromf and for the demon God. How fun!

Anyway, that’s my news for now. Check out the Rift in the Races audio book sample I’ve embedded below. It’s so freaking cool! David Bodtcher is THE MAN!