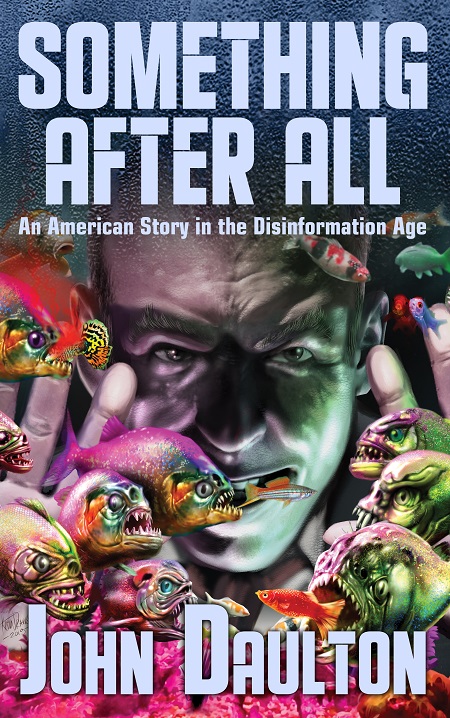 REVIEWS:
“SOMETHING AFTER ALL by John F. Daulton is an odd twisty snake of a novel, entwining archetypes and ennui into a blend that … manages to end up being inexplicably satisfying.” — IndieReader

“A manic, combustive novel about complex systems and the motivations that power them.” — Kirkus Reviews

“Over the course of this book, Daulton employs a prose style that is consistently spirited and sharp, and it ably captures Dean’s angst and irony-ridden view of the increasingly strange happenings around him …” — Kirkus Reviews

… Midas’ endless, reckless, exponential entrepreneurship makes for a clever comment on late capitalism, and the reader’s anxiety will grow as quickly as the Sardelles’ profits do. The novel, with its cartoonish, dark didacticism, is reminiscent in some ways of Roald Dahl’s works for adults …” — Kirkus Reviews

“… the storytelling skills on display here will be sure to keep the reader glued to the page.” — Kirkus Reviews

DESCRIPTION:
Dean Sardelle is in trouble. The family’s pet store empire is sinking. Some say it’s because Dean’s old man talks to fish. Others say it’s because Dean is the poster child millennial, living with his parents and playing video games all day. His mother’s health issues are drowning the family in medical debt. Their last hope was to send Sheila—Dean’s motivated older sister—off to college to get a business degree. But if the tuition doesn’t finish them, waiting four years will.

In walks Midas Murphy, a silver-tongued fellow with a golden touch. He says he can help. What follows will send Dean on a voyage through industry, espionage, alien sex cults, suicide, and a murder; and somewhere between truth and deception lies salvation for the family. Or not.