How to Get a Zero Masculinity Score 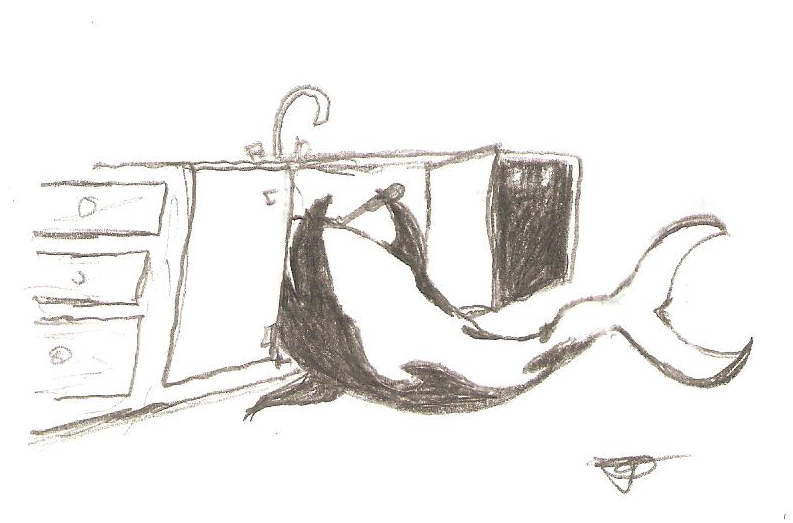 Question: What lasts for 3 minutes and 24 seconds, is full of lies, and damn sure won’t please my wife?

Close, but that’s not it.

Answer: The stupid goddamn “how to” videos I watched that said changing a freaking garbage disposal is easy.

I’m serious. I watched two of them. One of them was only 3 minutes and 24 seconds. The other one was like 5 minutes and 10 seconds. One was from Lowe’s, the other from Home Depot.

What a bunch of bastards. “Oh, it’s so easy,” they said. “Oh look, I’m wearing an orange apron, which means it’s so easy even a girl could do it.” They don’t say that out loud, but I know that’s why they wear those aprons. The guy on the Lowe’s video wore a blue one and the Home Depot guy wore an orange one. The only reason that Home Depot video took two minutes longer than the Lowe’s one was because the Home Depot guy had to climb Mt. Everest and rescue a kitten from a rampaging horde of snow yetis.

So, yeah, that’s how easy they made it look: Undo the thing from the flange with the snap ring and the, other thing, and then, do something to the plug—and don’t forget to turn off the power—then screw in the new thing, and do something else, and then BAM! That’s it, you’re done.

None of that crap comes off like they say. The “easy to remove” collar flange ring whatever was so completely not easy to remove that I bent the damn “Jam-Buster®” tool that came with the new one—and yes, that’s actually what they called it, including the little ® thing.

So anyway, I was forty-five minutes in, and I didn’t even have that ring thing undone yet. And when I did finally get it off (with a hammer), I spent another half-hour just trying to get one stinking spring clamp thing off the hose coming from the dishwasher. Which I also finally got off … with a hammer.

What kind of Neanderthal bastard puts one of those squeeze rings clamps with the squeezer ends pointed towards the back of the fucking cabinet? Who did they think was going to install the next one, Mr. Fantastic? Plastic Man? Maybe just a goddamn Keebler Elf? He can just walk in there behind all the pipes sticking down, get around behind and jam his little tiny elf hands in there and go to squeezing? Actual humans need to have shit facing OUT where we can SEE it, much less actually get tools at it.

So anyway, two hours later, I finally have HALF of the project done. Half. I have the old one out. It took me twenty minutes trying to figure out how to get the stupid plastic wire-holder cork-thing they used to hold the wire in place on the bottom of the old one BECAUSE APPARENTLY IT’S TOO GODDAMN HARD TO JUST PUT A FREAKING POWER CORD ON THE STUPID ASS NEW DISPOSAL … $200, TOP OF THE LINE, AND YET THEY CAN’T BUST OUT WITH ITS OWN CORD? I HAVE TO USE THE OLD ASS, SLIMY, JACKED UP ONE?

Do they realize that a ten dollar lamp made in Belarus comes with its own cord? A three dollar appliance from China does too. But how about a $200, ¾ horsepower, two-stage, “recycle your ground up food to save the environment,” state-of-the-art, Made in ‘Merica garbage disposal? No. Not that.

So, hey, that’s fine. Whatever. But you know what? There’s supposed to be a white, a black and green wire to work with. Three wires. All different colors. But, well guess what? There ain’t. There’s two black ones and a green one.

How in the hell am I supposed to know which stupid wire is the black one and which one is the white one when they are both black? 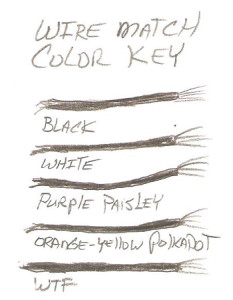 You see, there’s this whole thing about colors. It’s like, they named all the different colors with different names, like, you know “black” or “white” or “green” etc. for a reason. They did that because, well, each color is supposed to BE different. That’s why they made different words for each one. So you could, you know, tell them apart. But if the black and white wires both look the same, as in, they aren’t different, then you can’t say they are black AND white. You can only say they are black. Which is fine. But don’t then go on to pretend like someone can hook up something to the white one. Because there isn’t one.

At the very minimum, if you are going to just pull random colors out of your ass and name two black wires as if they are different, at least pick something more interesting than “white.” White isn’t even a color, technically. So go with, like, purple paisley or orange-and-yellow polka dots. Go with fuchsia so someone with zero masculinity like me can at least be reminded of why I suck. Or something. At least make your stupid, hateful lies interesting. 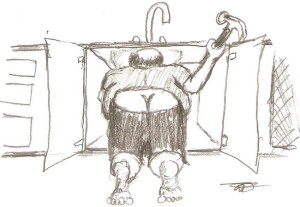 So, anyway, my neck is sore, my back is sore, my bad knee is freaking killing me. My bad ankle is killing me. My elbows hurt from leaning on them, and I have cuts all over my hands from jamming myself with the screw driver while trying to pry that insipid wire cork holder thing out of the bottom of the old unit, not to mention all the times I mashed, scraped and dragged my knuckles across sharp crap down under there as I tried to break that stupid flange ring thing off with the stoopidly named “Jam-Buster®” tool. Frankly, knuckle-dragging is how I feel in general. Like some dumbass ape who found a bag of roofing nails and tried to invent the enema with only himself to test it on.

So, yeah. My wife will NOT be coming home to be amazed and impressed with my manliness. Instead, she will come home to a bunch of tools and plastic wrap and loose screws and bits of wire and pipe pieces and copper spring clamp things and two big garbage disposal units sitting on the floor, one gross, dirty and wet, one huge and impressive and three times the power of her old one, because, you know, I was going to impress her like that. But nope. Not happening. It’s all strewn about the kitchen floor, the pieces everywhere like a busted open puzzle, the shattering of the image of me as a man. I suck.

But hey, our pest control guy and general all around handyman (note the last part of that word is “man” there), will come over tomorrow and fix it in about twelve seconds. I already called him. I’ll bet he’ll do it so fast he’ll try to tell me I don’t owe him anything. But I shall insist. I shall insist, and I will say things like, “I shall insist,” so that he knows I use words like “shall.” That shall show him.