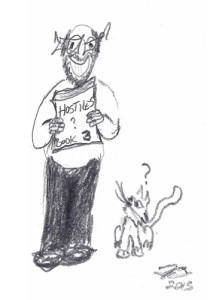 Progress is coming along nicely for Hostiles, the third book in The Galactic Mage series. I did run into a bit of a delay working on it, as I’ve been a bit caught up in the process of getting an audio book going for The Galactic Mage (book 1). However, that is well underway now, and I’m back on track again. After a few days to catch up on some contract writing projects, I am now ready to start the 4.0 round of revisions.

Round 3.0 (and 3.1, 3.2, and 3.3) was mainly concerned with Orli’s character. I didn’t think she was strong enough in my first draft—half of my Beta readers felt it was the case too—so I almost completely rewrote her character for the first half of the book. I think it’s much better now. Needless to say, however, that required a lot of redoing of other things, because writing a novel is like setting up a fancy arrangement of dominoes to knock down: if you start moving things around and changing stuff, you have to change everything that those changes touch and so on.

Frankly, it was a ton of work, but I’m so much happier with it now. I’m looking back on my early drafts and can’t even imagine what the hell I was thinking doing some of the stuff I did. I think I was channeling Orli in the mental and emotional place where I’d had her in my head during the episode with certain nefarious characters through the middle of Rift in the Races rather than Orli in the place where she was at the end of the book, which, obviously, is the Orli that begins book three. That emotional place (and I avoid specifics so as not to spoil Rift in the Races for anyone who hasn’t read it yet) at the end of the book comes back to her at the very end, which means I hadn’t spent a lot of time with her like that for several hundred pages. Basically, I hadn’t written Orli in that way since the beginning of the book and in the first book, so I sort of lost track in the early draft of Hostiles and had mid-Rift traits and attitudes still in place. Anyway, it’s all shaped up nicely now. 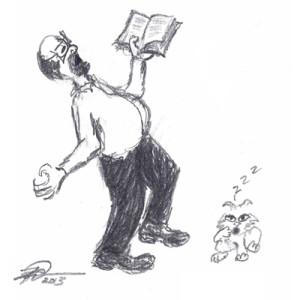 Anyway, so now I’m on to the “read aloud” phase of my revisions. I will go back to page one and start reading to myself out loud. The point of doing that is to hear how easy to say everything is. It’s about flow of language and sound. If I stammer and stumble over certain lines, then they need tweaking or rewriting. It’s kind of a long process, and it’s not perfect, but it does work. The way I see it, and because I actually know what it says having been over and over and over it several times already, if I can’t string the words together easily, then it’s probably clunky writing. As much as I’d like to think I am all professional and stuff at this, the reality is, they words don’t all come out perfect, even after all the writing I have done. Heck, some of the sentences in my earlier works make me cringe now. Bleh.

I’ve read a lot in books on writing that say, essentially, “You’re never done with a book you are working on; you simply decide one day to put the manuscript down and walk away.” I totally see how true that is. If I could go back and rewrite some of the lines in some of my earlier work, little bits that seemed fine back then but now I know I could do better, even just for style, I would. But I think that will always be the case. If I started doing that, I’d never get to write anything new. So, I guess I just have to love the good parts and learn from the things that I could have done better if I’d known enough to see the problem when I read through it on one of my many revising passes. I suppose that’s the story of life anyway, so I don’t feel bad at all.

I’m not sure how long this part will take, but Hostiles is a lot shorter than Rift in the Races, so it ought to go pretty quick. I’m hoping for the fifth or seventh of next month, or maybe mid month if it gets hung up, or if I start messing with the ending more, which I probably will.

Last but not least, Cris Ortega and I are hard at work hammering out the details of the cover for Hostiles now. We’ve been going back and forth between my insane ideas and her wonderful grasp of art and artistry, me trying to stuff like nine million things into the picture and her very politely and patiently explaining that there are principles of aesthetics in play. I’m so happy to have her to work with. She’s so good, and so professional. I’m very lucky to have her on board for this. I’ll post some previews and glimpses as they come up as I always do, maybe my first horrible sketch that I sent to her, in another blog post soon. But for now, you are caught up on progress for the third book of The Galactic Mage series (and the final book in the opening trilogy). Keep an eye out here and on Facebook for more updates on Hostiles and for progress reports on the audio book that is in production now for The Galactic Mage. That’s going to be really fun too.