So, because I am the luckiest bastard on the planet when it comes to cover artists extraordinaire (took me three stabs to spell that, oh you cursed squiggly red line you!), I can now officially announce that cover art is underway for Rift in the Races (book 2 of The Galactic Mage series).

I’ve had the concept for the cover pretty well chewed on, thought through, mulled over, sketched out, and any other verb-preposition combos you can think of that speak to that sort of thing for quite some time, so when Cris Ortega contacted me and told me she was ready to fire up book two cover art, I squealed like a little girl and rapidly sent off my sketches.

I suppose I should be more cool than that, be (pretend I am) all laid back. It’s probably better marketing strategy to tell you something different, something like:

Of course I yawned when I got Miss Ortega’s note and then swirled the cognac in my huge crystal snifter while saying something delightfully droll to the two enormous Irish Wolfhounds reclining loyally at the foot of my over-stuffed leather throne chair. Then I laughed, “Hah-hah,” in that throaty way fancy highbrow artists do when sitting before a crackling fire and enjoying the lofty airs of being too cool to get excited about this stuff anymore.

If I were trying to cultivate my authorial coolness factor, I would say that. However, I am not there yet, so I still love this stuff, and I’m still stoked to have an artist of Cris Ortega’s caliber working on my book cover again!

END_OF_DOCUMENT_TOKEN_TO_BE_REPLACED

What an amazing ride this has turned out to be. What was just a leap of faith has turned into a wild ride that is fun and fascinating. I keep waiting for the bottom to fall out; in fact, I have been afraid to say anything or do anything for two weeks now, so sure that the least mention, the least anything would somehow curse it.

But, the marketing part of me has been telling the artsy-fartsy writer part of me, “Don’t be silly. It is what it is, and it will last exactly how long it will last, good or bad, regardless of what I blog about or whether I change my lucky underpants.”

So, I struck a deal with myself and told me that if The Galactic Mage hit Amazon’s top ten lists for both Kindle Science Fiction and for Kindle Fantasy, I’d say something on the blog. So, here I am. I’m writing this. My wife says that the cats are going to eat me in my sleep if I don’t change my lucky boxers anyway, so, I guess I might as well just throw karmic caution to the wind.

This is The Galactic Mage on the Amazon science fiction best seller charts for Kindle: 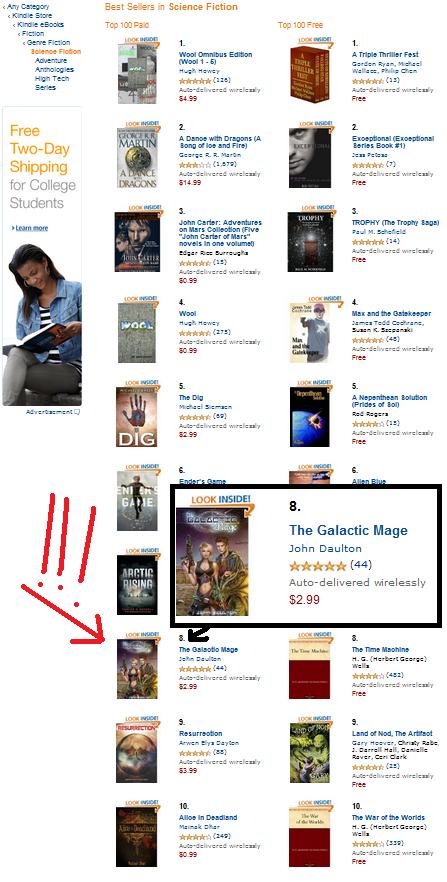 I still have trouble wrapping my head around it, but there it is. And people seem to be really enjoying it. It’s getting great reviews on Amazon from readers, and not just from my mom! But real people (not that my mom isn’t real, obviously), real people who have no reason not to say what they mean. The worst review I’ve gotten compared the love story part to Romeo and Juliet. I mean, how can I complain when the person who hates the story most uses Shakespeare as his example of what really bad love-story writing looks like. END_OF_DOCUMENT_TOKEN_TO_BE_REPLACED