It’s time to reveal the full cover on the upcoming Galactic Mage Series prequel Ilbei Spadebreaker and the Harpy’s Wild. I figured since my editor is done, and I’m getting it delivered to proofreaders now, I’m close enough to release to bust out with the whole cover.

As usual, Cris Ortega rocks it with this new fantasy novel book cover, and she’s really captured the feel and flavor of the story. The story takes us back before Altin Meade is even born, and it follows Ilbei on his adventures as a sergeant in Her Majesty’s army. I’d say more, but I don’t want to spoil anything, even by accident, so with that, I’ll just show it: 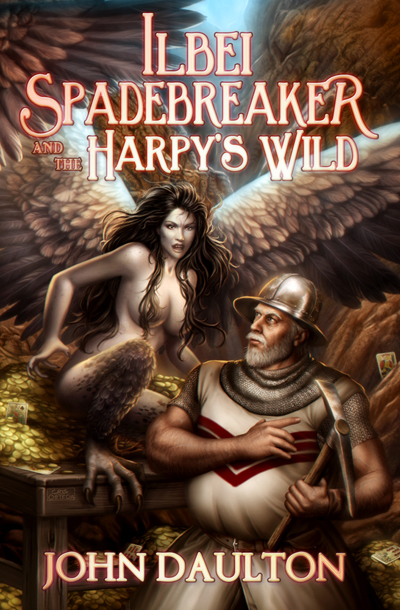 There it is! Woot! I’m so stoked. Cris is just so amazing. She really nailed this. I love the harpy’s feet too, err, her talons. Or her, uh, taloned feet. (It’s kind of funny, because I kept going back and forth on how to talk about such things in the book … are they feet? Are they talons? Can talons “serve” as feet? In the end, I decided they can. I’m sure lots of language sticklers are going to swarm in and assert that feet are distinctly different things than talons … or hooves or claws or paws, etc. I know. I don’t care. That’s the fun of writing books. You can look at the “rules” and decide if they are useful or not. Sort of like most people do with speed limits on long, empty highway straightaways.

Anyway, I know some people like to see the earlier versions, so here are my terrible first sketches. I know these are super horrific, and, yes, they are even way worse than I can and have done for the comedy type stuff here on my blog, but Cris doesn’t really need fancy sketches. She just needs to see where I am coming from. I think in a way, it’s pretty cool to see how much she does with the total garbage she gets from me. 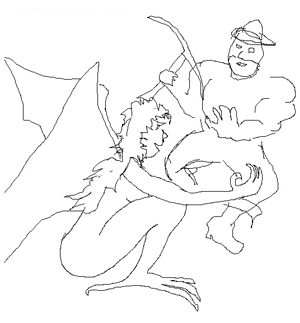 I know, isn’t that the worst sketch of all time? But hey, that’s why she gets paid to do it, and I don’t. So, if you think that’s bad, here’s another one. This was more a total concept thing. I did both of these in MS Paint, because my scanner isn’t working, so, it really was worse than what she usually gets from me. (Although, when you see the sketches for the Alien Arrivals cover, you’ll see they are even worse—if you can even imagine that.) Anyway, this one shows something closer to the final version. The blacked out parts are my descriptions, and I redacted it all because it has some spoiler stuff in it that talks about some of the reasons for why things are there and what needs to be done, etc. 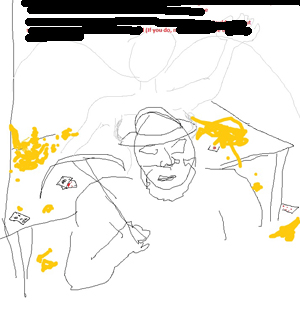 As you can see, Cris did a great job while working with essentially totally nothing from me. But she came up with a rocking new cover for the upcoming series prequel.

I’m hoping to have Ilbei Spadebreaker and the Harpy’s Wild out in March. That’s the goal. It all depends on how long proofreaders take and how long formatting and printing takes. I admit it’s going to be tight to get it all in, but I’m shooting for the last week of March as my goal. There’s just so much of the end process that is out of my control that it’s impossible to really lock down dates very well. But the bottom line is, it’s really close.

Don’t forget to sign up for my newsletter if you want to get an email on the day it comes out. Plus, I’ll be putting out the fourth book in the Galactic Mage Series, Alien Arrivals, early this summer, so you’ll be notified of that too. I’m actually hoping to get the fifth and sixth series books out this year as well. I’m pretty sure I can get the fifth one out, and number six, well, it is technically possible. So, we’ll see. Anyway, sign up for the newsletter if you don’t want to miss out on release days.