Alien Arrivals is the title of the new Galactic Mage Series book four, which is expected to be released in late spring or summer of 2014. I had planned on putting it out sooner, but I am working on the whole second trilogy of the series at once, so I really want to get through the end of books five and six before I go back and polish out book four. However, Alien Arrivals is written, and as soon as I get the prequel novel I’ve just about got ready to release out (Ilbei Spadebreaker and the Harpy’s Wild), then I’ll be off like a shot for the rest of the year trying to get the fourth, fifth and sixth books out. I’ll be posting short, periodic updates on the Alien Arrivals page in the bookstore section of my site: here. And, of course, more blog posts to come.

If everything goes smoothly—unlike December and the first ten days of January—I’ll have all four new novels out by December, 2014. First will be the prequel, which jumps back before Altin’s adventures and spends time with Ilbei Spadebreaker during his time as a soldier in Her Majesty’s army. That should be out in March or possibly April (February if I get super lucky, which I never seem to do). Then look for book 4 of the Galactic Mage Series in early summer, then book 5 (still untitled) in August or September, and, hopefully the sixth book by December—or January 2015 if I just can’t get it all in this year. But I really would like to have them all out this year, as I’ve got some ideas for 2015 that I’d like to be free to work on as well.

So that’s about all the news there is for now. Just for fun, I’ll share a few of the black & white sketches from the early versions of the Alien Arrivals cover. I’ll be doing a full share on the Ilbei Spadebreaker and the Harpy’s Wild cover on my blog here pretty soon, so keep an eye out for that.

Anyway, as promised, here’s the first sneak peak at the cover art for the fourth Galactic Mage novel. Pernie features heavily in this book, so as you can see, she gets some cover time again, even more so than she did on Rift in the Races. She’s a little older too: 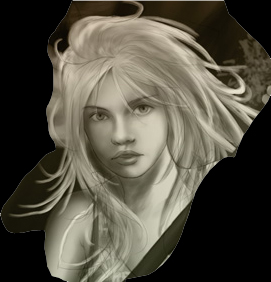 Pretty awesome, even for a “rough” sketch. My amazing cover artist, Cris Ortega, does “rough” sketches that are actually pretty amazing for finished stuff. She just keeps blowing my mind every book. (Wait till you see the Spadebreaker cover!).

Okay, so this next one is a picture of Orli. On the cover she’ll actually be with Altin, but Cris and I are working out some stuff on how Altin looks, so I’m not including that part yet, since we don’t quite have it how we want it yet. 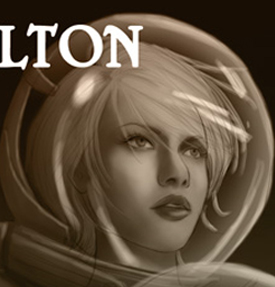 That’s so cool. I love the expression on her face. Plus, I mean, who doesn’t like a hot chick in a space suit?

All right, the last thing you get to see is a sketch of someone whose name I won’t say. While technically, those of you who have been following along for the first three books ought to recognize him right off, I will say that there are some new villains that come along in the new books too. I love writing nasty, mean people, so this is fun. And, after all, how good can the good guy’s be if they never get tested by really bad ones? 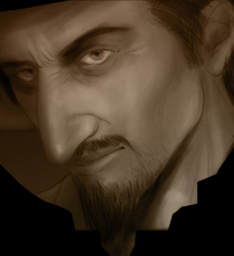 Can you figure it out? If you can, send me an email and tell me who it is (use the Contact option at the bottom of the page). If you want to leave a comment here on the blog, great, but don’t give it away, just say something like, “I know who that is!” That way others can have a chance. If you get the answer right in your email, and you include a mailing address, I’ll send you an autographed series bookmark. But you have to act quick, because I’m only gonna do that until the book comes out, or until someone (including myself) spills the beans on who that is.

So anyway, there you have it. That’s all you get for now. There some other parts on this cover you haven’t seen, including a really cool alien creature … but, you’ll just have to wait for that too. When I’m closer, I’ll do a full cover reveal.

Until then, thank you to everyone who has been so supportive of the series these last two years. You’ve really made my work, and my life, so much fun. Thanks for all the warm feedback and for leaving so many kind reviews on Amazon. I cannot adequately express my gratitude.

Also, if you want to be notified when the next books are released, sign up for my newsletter on the sidebar, the bottom of the page or just click here: Daulton Books Newsletter sign-up form.