For starters, Hostiles out, and it’s doing great right now. So a great big THANK YOU to everyone who has picked a copy up! You’re helping it climb the Amazon Hot New Releases chart (this morning it was at number 13), and it’s just awesome to have such great support from the people sharing this story with me. 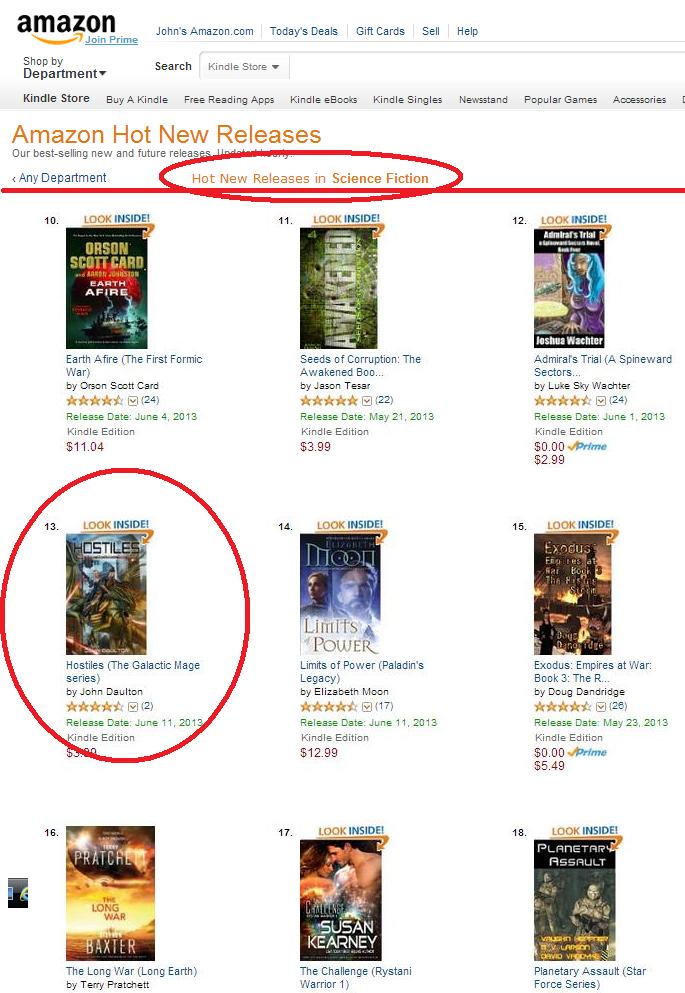 The release of Hostiles marks the completion of the opening trilogy of The Galactic Mage series. The second trilogy is underway. I have some research to do before I actually start writing the first draft of the first book (series book 4), but the outline and core concepts are set up, so it’s just a matter of fine tuning and setting up a chapter-by-chapter outline. I’m not sure what I’m going to call it yet. I have a few title ideas kicking around, but I haven’t picked one yet, so for now its file name is “Pernie 1.” If that doesn’t give you some clues about what’s to come, nothing does. Heh heh. I’ll talk more about that in a second, though.

First, just so you know where the book really is in my actual writing calendar, I’ve got some contract writing to finish up, and the last act of a play I’m writing to knock out. Once I’m done with those, then this fourth novel can begin in earnest. I’m really excited to get going, because it will let me write something a little different, even though it continues the story we are already on.

I’d like to think I can have book 4 of The Galactic Mage series done by January or February, but I’m not promising any such thing. I learned with Rift in the Races that the best plans in the world mean zip sometimes. So I won’t obligate to a date yet as it is far too early in the process. I will give a few hints about where the story is headed, though, because I know people are curious.

I think most everyone who read Hostiles will know that there must be something going on with Pernie. And so to quell any remaining doubt, yes, there is something going on with Pernie. Her story will be a central part of the next book as I have the trilogy set up now. In addition, many readers have also asked about the elves and what’s up with those guys. Much of that will be revealed as the next trilogy unfolds as well. Additionally, there have been those who wondered why such a large portion of Rift in the Races was spent dealing with the darker side of society on Kurr. I’ve been asked on a few occasions, “What was the point of introducing all of that?” In the coming trilogy you will see.

I also know there are lots of other things people are curious about. But rather than go on about what specific questions are going to be answered, I’ll just say this: my intent all along has been to tell a story that allows readers to have a place to go and BE. I do that because that’s the kind of books I like to read. To make that happen, at least for me to do that as best I know how, it requires that some parts of the story be allowed to reveal themselves in time. There is an inherent requirement of having loose ends, or at least loose-seeming ends, as the only way I could answer everything would be to never publish anything until the whole series was written and just put it all out at once. Which I suppose might even be the ideal way of doing it, but there’s just no way to do it like that and still pay the bills. Besides, anticipation is part of the fun.

So that’s where it the series is right now, research mode for probably the next two weeks, and hopefully by the end of the month I’ll have my chapter-by-chapter outline ready. That will also give my wrists a chance to breathe after the revision process too, which is a good thing. I’m hoping to pace myself around 5,000 words a day once I start work on the first draft. Don’t know if I can do it, but I’m trying to raise the bar on my own productivity. I feel like I’ve learned a lot as I’ve been writing the series and hopefully that will translate to increased output. I believe it will.

(Also, keep an eye out for a website upgrade, so if you come back and it all looks different next time, well, yes, you’ll still be in the right place.)