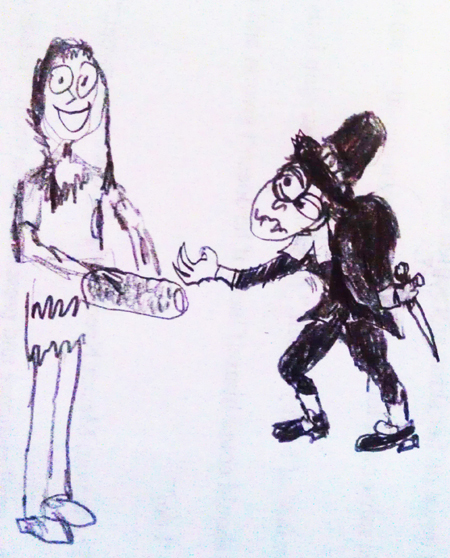 Well, here it is, two goddamn days before Thanksgiving and people are falling all over themselves to shit on American history. I’ve just seen my third Facebook version of the old: “Oh, those poor Native Americans were so nice when they showed those evil Pilgrim assholes how to hunt and plant corn, and yet, wow, look how that backfired!”

Do people think all four hundred years of history happened in the same damn week?

What the fuck is wrong with us as a nation? What is this perverse, hypocritical, selectively-educated need people have to gorge themselves on guilt and self-loathing that has come over everyone these days? And by “self” I mean not just as racial identity for <cough> European-Americans  but “self” as in national identity. Why the historically based self-hate?

Or is it not that at all? Maybe it’s actually grotesque, hypocritical, selectively-educated arrogance instead. A sense of historical, holier-than-thou Monday morning quarterbacking?

Whichever one—and it matters not because the results are the same—in the end it’s all just an astounding lack of historical perspective, human perspective, global perspective and temporal perspective at work. It’s a choice to be miserable and full of hate and anger and revulsion and self-loathing/cultural loathing/national loathing. It’s hand-picking one emotional take on history and prejudicing all others. It’s the complete abandonment of all context outside of the one that serves the arrogant, self-righteous, tsk-tsking attitude of people who would rather pretend that somehow by crapping on history, on modern America, they themselves, living in this modern age, are somehow less guilty of whatever crap they do or don’t do every day in the actual now. Do people actually think that, had they lived back then, they would have done ANYTHING different? That somehow they would have stood up like some fucking super hero and changed everything? How stupid and blind and absurdly arrogant does someone have to be to think that they would have somehow been this righteous figure, crusading for justice, the active and motivated champion of right …  if ONLY they could have lived back then! What bullshit. Forget looking at your own sloth, your own greed, your own neglect, your own contribution—by action or apathy—to whatever evil is going on in the world today. Forget all that, let’s just crap on history and puke a big shit attitude on the day that is supposed to be about fucking gratitude, about bringing people together.

And I already know what you are about to say to that last one, so don’t.

First off, get your history straight. Take off your “I feel so bad for the Native Americans” goggles for a second and look at humanity on a bigger scale than just the USA. I hate to break this news to you, but everyone was not singing Kumbaya over here in the Americas before the Europeans showed up. The Aztecs were brutalizing everyone in their part of the world, and the tribes of the northern continent were at each other with great regularity, savaging villages and burning women and children alive in kivas when it served them to do so.

I wonder how long it would have taken the Aztecs expanding nation to come up with or even allow the possibility for women’s suffrage, much less nurture a culture capable of giving up slavery eventually and, you know, stopping with all that human sacrifice all the time. They had three or so centuries to get that done; so they must have been close, right? And how about Asia? Did the women in any of the Chinese dynasties vote? I forget. I bet they did though. I’m sure of it. That’s why those all dynasties went down, too many chicks voting for new nail polish laws or something instead of … something else. And hey, how about that whole Caliphate thing? That went well for the ladies in that part of the world, didn’t it? And not just the women, but mercy and kindness abounded for everyone the entire time that empire was being built! It’s just so beautiful it makes me tear up a little bit thinking about it. It makes me hate living in the only human culture that ever did anything crappy on a large scale. God, how did I get stuck in the only nation on Earth, in all of history no less, that didn’t shape itself, it’s map lines, with love and flowers and songs about fairies and unicorns?

So, yeah, while it’s all nice and dreamy to think that those pure, innocent, sweet, ever loving Native Americans were—to the last man, woman and child—all playing with puppies and watching each other’s kids on Friday nights before the great white Satan arrived, it turns out that the Native Americans in history were … dare I say this … HUMAN. That’s right, they were human just like all the human societies out there. And like all human societies, there are good people and shitty ones. Or as my favorite take on the nature of war and violence in human societies from Team America goes: there are dicks, pussies and assholes.

If you are unfamiliar with this great and brilliant (and hilarious) scene, watch this video. He’s talking about America in context with North Korea a few years back, but this could be any nation or empire in all of history talking. It’s a metaphor about strength and power, and it’s both true and tragically untrue at the same time … always based on context.  Also, it has lots of dirty words and stuff in it, so if you are a prude, don’t watch it because you will, as usual, be offended.

So, yeah, the Europeans that came over and eventually became known as Americans, had all that dicks, pussies and assholes thing going on, just like the Native Americans did. Just like Asian history is full of. And African history is full of. And European history is full of. It’s still going on everywhere. All the time. In some places and times things are good and people are nice. In other places and times, not so much. You see, that’s how this whole history thing works. Shit happens, and then there is some kind of outcome, and then there are periods of stability or chaos, and then more shit happens as the dicks, assholes and pussies find new ways to screw each other or get along interchangeably. And yet, still more change eventually happens, and, well, more periods of chaos or stability, and, well, here and there along the way people write down what happened. Then other people come along and change what was written so it sounds more like the way they want it to sound. Then some whiny fucker comes along and hand picks some chapter from some particular version and uses it to shit on Thanksgiving.

But how about this version: the pilgrims and the Native Americans—as depicted in the simplified version of the first Thanksgiving—were people who were actually trying not to be dicks or assholes. Now you could make an argument that they were all being pussies, both sides, if you wanted to. But I don’t make that argument. What I do is use my brain and point out that AT THAT PARTICULAR TIME IN HISTORY, THOSE PEOPLE WERE ACTUALLY BEING NICE.

Even if it was for one goddamn day, they were getting along and grateful.

Someone always wins, too. Always. There’s always been an ebb and flow of power. Read Marx. Read Orwell. Read Thucydides, or Homer or Lao Tzu. The Bible. Greek and Roman mythology. Shakespeare. God, just read something.

Watch that movie Apocalypto. I love that movie because I think it depicts an important concept that modern Americans (even just people in Western culture in general), those who feel the need to hate themselves, their country, their race, or whatever else, need to look at. Not because it suggests how douchebaggish the Aztecs were, but because it gives by the end (watch it all the way to the end) the perfect depiction of humanity as a RACE, at least so far as ALL history has played out thus far. You have to look at all humanity and all races and all time. You have to be realistic. Yes, hope for more. Work for more. But for the love of God, be real. Take off that self-righteous crown of indignation you wear and use your brain for something besides holding that damn thing up. Grab some fucking perspective already.

And stop shitting on Thanksgiving.

Stop picking one blind, idiotic, selectively read, out of context (or singularly contextual) version of history and applying retroactive morality to it. Stop handpicking narratives and ignoring others, just so you can justify your shitty, backwards looking, hateful addiction to regret and apologizing for crap you had nothing to do with.

Go have a fucking turkey and a beer and be grateful for one fucking day. Just one! Be grateful that you know how to read, that you have a turkey and a beer, and that you happen to live in an age where you have the Internet to spew your lame, out-of-context self-flagellation. An age where we are putting landers on Mars and hardly anyone dies during childbirth. An age where we save babies that are born months too soon. An age where you should being happy that we didn’t all blow ourselves up during the Cold War. That minorities get to go to college. That someone is working on a cure for some new disease. Spend a moment recognizing that by the evidence of those things, there’s hope that  all the other shit that isn’t perfect yet might get fixed someday too. Stop hating history. Stop telling me I should apologize or feel bad for it. I didn’t do history. It’s not my fault. It’s not your fault. History just happened. It already happened. So go hand out a turkey at a homeless shelter if you are pissed off about injustice. That hasn’t happened yet, so go do it and make it happen. Or don’t. Be pissed and full of stupid, pointless hate and, frankly, full of racism if you still want to. But leave me to be grateful for the blessings we have and to hold hope in my heart. Even if just for one goddamn day.

One thought on “Stop HATING on Thanksgiving … and America, and Me”