One of the coolest things about writing for profit (or at least, writing in hopes of not losing too much) is that, in rare moments, you get to do things that make it feel like you actually get one over on The Man. You know, stuff that makes it seem like you might actually have a chance of “winning” when it comes to taxes and all that money-grubbing stuff, at least one time. Today was one of those days, or at least, it set up one for April 2013 when I do my taxes. Here’s why:

I get to write off a crystal ball.

Or maybe you’re saying, “Why is that worthy of a ‘Muahahahaa!’?”

Well, the answer to the first question is just what I said: I will be writing off a crystal ball. As in a ball that is made from crystal. Well, technically it’s “grown in a lab” if you want to know the facts about how it came to be. And yes, I bought one.

“Why do you need a crystal ball? Are you a mystic or something?” you ask.

My answer to that is, “Stop being so impatient; I haven’t even answered the second question yet. You’re actually interrupting yourself.”

So, the reason it is “Muahahahaa!” worthy is because it’s a crystal ball for gods’ sake. (Notice the use of lowercase ‘g’ there, and the plural possessive ‘s’. I kill me.)

I’m serious, have you ever  gotten to write off something this cool on your taxes? Hell, have you written off  anything that was even remotely fun at all? I haven’t. And no, you don’t get to count the fact that your company wrote off that trip to Vegas on your expense report. The company did, not you. Unless it’s your company. In which case, you may appreciate what I’m talking about. So, yeah. Muahahahaa!

Now, as to the question of why I need one, well, I could tell you, but then I’d have to send Taot to your house to breathe fire on you, or, at the very least, have him snatch you out of your yard and eat you. Which would be a shame. However, to avoid that kind of violence, I’ll just say that it’s a secret pertaining to the next two books in The Galactic Mage series. Which means, technically, I have a trade secret! Who knew writing would be the exact same as being a secret agent? Now I just have to learn how to fight for when I get attacked by enemy spies.

In the meantime, I will say, I had fun getting my new crystal ball, and it’s the getting of it that led to the title of this post. Which I will explain now, because it amused me to think of it in this way… the back to the future thing. It’s about my needing to go back in time to go forward in time (and it also explains that ridiculous drawing of me at the top).

So as I said, I needed a crystal ball, something rather arcane in itself, clearly—heh heh, I said “clearly” while talking about a crystal ball—the inspiration just keeps pouring out; the muses are generous today—hey look, multiple em dashes; I’ve been looking for an excuse to do that (the 19th century writers did it all the time). Anyway, I needed one, so I got one. But I had to go to the only place I know that sells them, which is this little hole-in-the-wall shop in Old Sacramento.

Now for the non-Sacramento people, Old Sac (as we call it) is about six or so square blocks of what is essentially an outdoor California Gold Rush museum. It’s a maintained section of town dating back to the gold frenzy that helped populate this state a hundred and a half years ago or so. It’s actually pretty cool. Cobble-stone streets (in places), old wooden buildings, a very good museum dedicated to steam engines and the transcontinental railroad, and, even more cool, it’s right on a river which sports an old-school river boat. (Think Mark Twain and the Mississippi… Calaveras county ain’t that far away).

So, that’s where the mystic shop is. At least that’s where the one that answers their phone is—there are others in town; they just don’t have very good retail habits, like, you know, having someone working when customers call. So I refer to this shop as the shop because it’s the only one I’ve ever been to that’s actually open when you show up. And trust me, I tried to find one closer today. As usual, there weren’t any. So, off we went to Old Sac. Off to get something arcane that I need to help me write a book about the future.

Well, this here is a picture taken from just outside the mystic shop, right after I got my crystal ball. I’m serious. I am like three steps out the door. 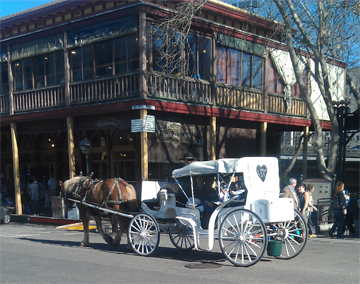 And I’m going to love writing my crystal ball off on my taxes even more.