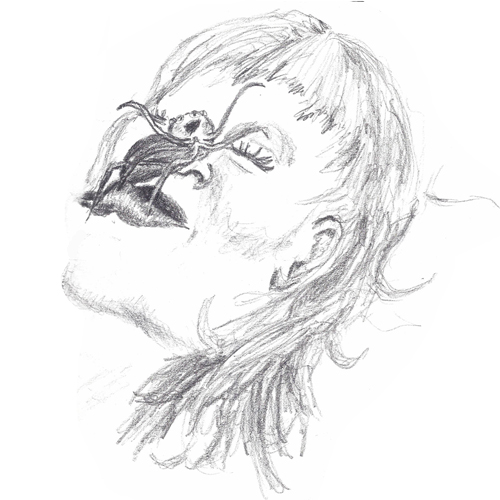 Did you know that spiders wipe their asses on your lips at night? They do it while you are sleeping. Many people don’t realize this, but it’s true. While you are ignorantly dreaming away, they climb up on your face, all those little spider feet touching your skin, tippy-toeing around, taking a drink from the salty fountain of your tear ducts, and then, they poop in the corners of your eyes. They do. That’s what that “sand” in your eyes every morning is.

Oh, you want to say, “That’s what the sand man left me!” You want to tell yourself those little crusties are called “sleep” or whatever other innocuous terms you use to feel better about it. But that ain’t “sleep,” and it ain’t sand either. You ever seen the Sand Man? I mean for real and not in a kiddie book or movie? Yeah, I didn’t think so. But you have seen spiders haven’t you. MmmHmmm. And guess what else. When they are done fertilizing your face, they go and wipe their little eight-legged butts on your lips, just laughing and laughing all the while. That’s what they do. They laugh and wipe. Hah hah hah. Wipe wipe wipe. 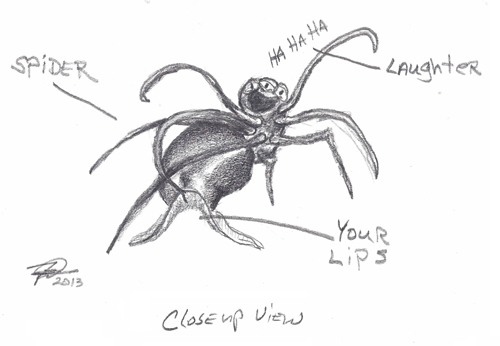 Normally, there’s not much you can do about this. I mean, you’re asleep, right? So you’re kind of helpless. I mean, I pay for pest control, and that’s reasonably reliable, but spiders are insidious, and they have powerful allies. But, I get ahead of myself. First, I suppose I should get to the reason I’m bringing this up here, because in the end, it’s about me, me being the center of my own universe and all.

So here’s the thing: I like to hang out and drink in my driveway in the evenings, the wife and I and whichever neighbors happen to come on by. I am a social animal, at least for small portions of the day, and sitting in my driveway enjoying a beverage or nine is how I unwind after a day of generating genius science fiction and fantasy prose—or mediocre to poor science fiction and fantasy prose that I then tell myself is genius after a beer or nine. Either way, the last thing I need while recreating outside is some evil spider to come do whatever they do during the day, like try to tear off my face and suck the plasma out of my cheek-muscle tissues or something. It’s bad enough that they drop dookie in my eyes and wipe their butts on my lips at night, but having them invade my awake time is intolerable. 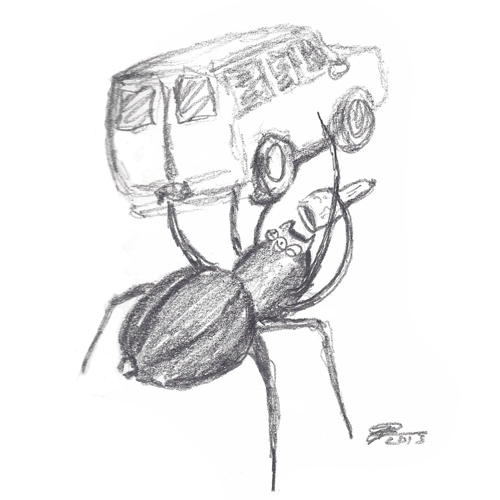 Well yesterday, as I went out into my garage, it happened, an eight-legged outrage, a thing of waking nightmare. I opened up the garage door, prepared for an evening of Delta breeze, beer and my bride, when lo and behold, there it was, a wolf spider the size of a small Ukrainian village. Or at least very nearly as big as one. I didn’t measure it, but I know for certain that it was huge and hideous. Its legs were as long as NFL goal posts, and it had teeth like rows of razor wire, gnashing and spitting acid at me. Apparently it had just lifted my wife’s truck up off the ground and ate her fuel pump before I came out. I believe it was actually intent on tearing out her transmission and mangling it with those teeth as well, but it heard my hand on the door as I was coming out and dropped the truck (thank God, because the fuel pump cost us $500 by itself. Think I’m kidding? Here’s the receipt! Yes, I write fiction, but even I can’t make this kind of thing up. The evidence is irrefutable.)

Well, so there I was, face to face with this hideous monstrosity. The intelligent thing to do would have been to run. But, I mean, I had to think of my family. And besides I like to think I am a writer in the manly cloth of Jack London or Earnest Hemingway, so the very moment my sphincter spasms stopped, I snatched up my wife’s nearby running shoe, and, like a dragon slayer with a small nylon-and-rubber sword, I beat that spider into oblivion. 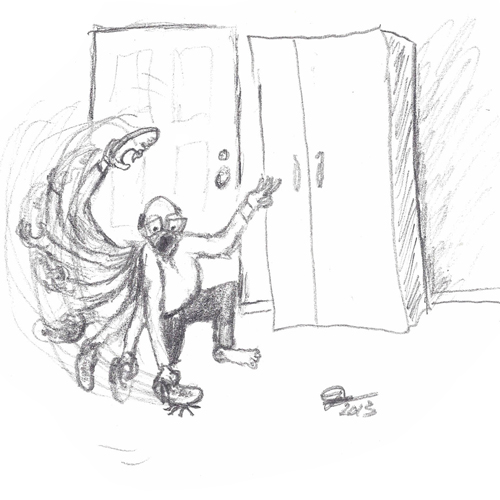 Now I admit that sometimes in my enthusiasm for telling a tale, I can omit small details from time to time, so I’m being perfectly honest for a moment, by the end of bludgeoning, I was pretty horrified. Now I know what you’re thinking, but that’s not why I was horrified. It wasn’t horror for the spider itself (that had passed in the wind of the aforementioned spasms), nor was my horror brought about by the killing of one of God’s creatures—for surely nothing deserves to be pounded into mush more than a giant spider that came into my garage intent on eating my wife’s Chevy (and we’ll get to the God’s creature thing in a moment anyway)—no, my horror was for the monster’s solidity, it’s nearly unassailable mass upon which I had had to mash and mash for what seemed eons in that slow-motion thing that time becomes when people are locked in mortal combat as I was.

Beating that spider to death was akin to beating a two-inch square, half-inch thick pork chop to death with a tiny chick shoe.

It had the solidity of freaking meat. 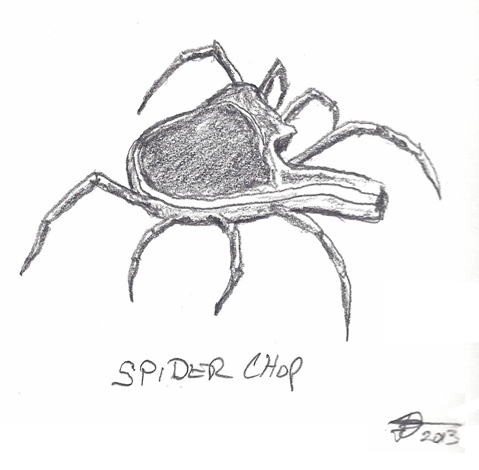 Here’s the thing. There are laws of Nature. We’ve all heard of it. They call them: “The laws of nature.” Like, people refer to that all the time. Well spiders, as part of nature, should abide by those laws, particularly the statutes that directly apply to them. One of these statutes specifically states that all spiders are supposed to crunch beneath the blows and the heels of superior beings, which in the case of the spider in the garage, was me, the only human present at the time. Clearly superior. When we humans strike spiders, when we step and stomp on them, they are supposed to give forth their lives in a satisfying but very easy to accomplish “crunch.” A simple, very liquid “squish” is acceptable. If they choose to be mashed flat with no sound or texture at all, that is also fine, if somewhat unrewarding. But what is not decent or in any way acceptable is for a spider to have such physicality as to make its body density akin to some considerable portion of meat. Like a pork chop, as I have already said. 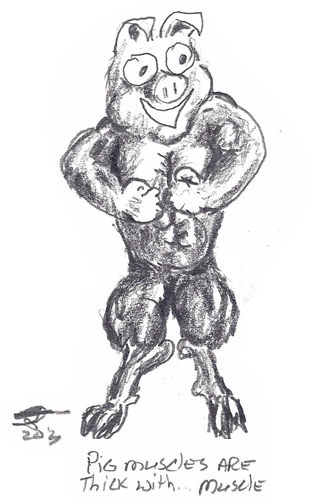 You see, pork chops are dense because they are pig muscle. Pigs are big animals that can weigh hundreds of pounds. Their muscles are made thick because they are thick with, well, with muscle. I expect that if I were to try to step on a pig it would not go well. There clearly would be no satisfying crunch (nor is there one required by the laws of nature). If I were to try to beat a pig to death with my wife’s little chick-sized shoe, I imagine it would go much the same. Which is fine. Don’t try to beat a pig to death with your wife’s shoe. That is a valuable tip for any homeowner to know. However, let’s be honest: how often are you going to have your garage invaded by a pig?

Which only proves my point. Pigs are respectful creatures who courteously live on farms as has been decreed by the laws of nature, giving forth bacon as they are required to. Spiders should give forth crunches when stepped on. But it seems now they do not. In fact now they shamelessly flaunt the law by trespassing and failing to crunch properly at all. This is intollerable. In fact, not only are spiders whose body density rivals the solidity of a pork chop being disrespectful to natural law, they are being the tools of Satan. And there can be no doubt about it, for who is more opposed to law and goodness and decency than Satan? No one, that’s who. 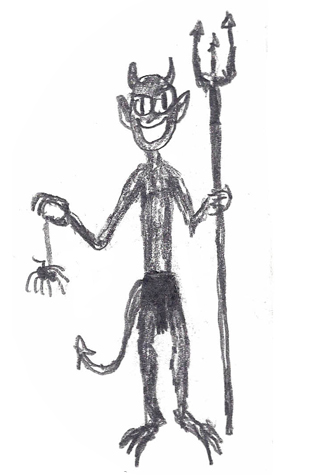 Which means, I had the tool of Satan in my garage. And yet, there I was, fighting it with a shoe. A woman’s shoe no less. And yet, despite my general aversion to all things hideous and evil, there I was, doing battle with it heroically. All alone. In fact, I was exactly like Legolas fighting that giant elephant in the last Lord of the Rings movie. That’s how heroic it was.

So, you see, clearly I am not some sort of wuss and candyass, as some might try to assert in passing conversation. I don’t see other people running around in open combat with the minions of Hell, the very servants of all Satan’s wrath, armed only with a tiny shoe. Others don’t, but I did. So keep that in mind in case someone brings it up or something. Which they might, which makes them liars and allies of Satan too. That’s all I’m saying. So be aware.

Oh, and use mouthwash right away after you wake up. I mean, why else do you think morning breath smells like that?