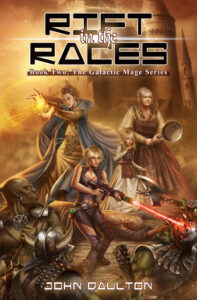 Well, after a whole year of working on this story, it’s finally ready. The final print files are in and approved, and Fernando is formatting them for Nook and Kindle as I type this. He says he should be done on Saturday, but who knows, maybe we’ll get lucky and it will be sooner. From there, I will upload them to Amazon and Barnes & Noble, and check to make sure they work. If they do, then I’ll throw the switch and it becomes a matter of hours. They say approval can take up to 72 hours, and with the glut of new stuff coming out these days, that might be the case, where book one only took about six hours as I recall. But, that’s what we’re looking at.

I guess, just to point out it is possible for further delays, if for some reason the files don’t work properly, then they’ll have to be messed with until they do work. Hopefully that won’t be an issue, and last time there were no problems, so I’m keeping a positive outlook on that front.

I also said I’d release the book trailer video today, so in keeping with that promise, here it is. I’d like to thank Mike at MGNexus for his awesome work on this. And of course, I can’t pass up another opportunity to rave about how awesome Cris Ortega’s artwork is. She’s simply fabulous, as anyone with eyes can see. Anyway, enough preamble. Here it is: