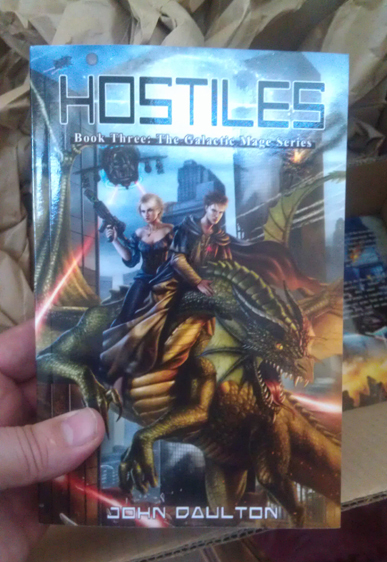 Well, Hostiles is reeeeally close to being done. I have gotten my galley copies from the printer and delivered them to my proofreaders. I’m reading through my copy, and hopefully everyone else has dropped everything in their lives as well to do this singular task. Barring any unforeseen delays (and incorporating some degree of realism into the plan), I would guess everyone could be done proofreading by around the 12th.

Once I have all the notes back with any typos or whatever, I will go in and double check all the comments. I will then add the fixes to a master proof, which I will send back to Fernando to fix in the print file. Hopefully he can get that done in a day or two, but I never know how that’s going to go. He went and had kids and stuff without my permission, so now he tries to tell me he has family priorities getting in the way sometimes, which is just crazy talk.

Once he gets the fixes in, he’ll send it back to me, and I’ll check it against my proofs to verify none of the errors were missed. Then, if it’s all cleaned up, I’ll let him know we are good to go, and he’ll convert the file to all the formats for Kindle, Nook and Kobo. Those usually process fairly quickly and can be up in two days or less, which means that, in theory, Hostiles should be available in the last half of this month. Assuming proofreaders are busy burning through it all right now.

So that’s the update. I’ve got a big promotion going for the first book (The Galactic Mage) on June 14th (or at least I do if everything works out on it, anyway), so I’d sure like to have Hostiles out in time for that big push on the series. Plus, the audiobook version of The Galactic Mage ought to be going live like literally any day now, and that could, in theory, generate some demand for the completed trilogy as well. Obviously, I hope it does.

Speaking of the completed trilogy—and the word completed in particular—I know people are curious about the series itself and may want to know what I mean when I say “completed trilogy.” I plan on writing an updated blog post about my plans for the series, and I’ve touched on this a couple of times before, so for now, I’ll explain it simply this way: the series as planned will be built in trilogies. That way there is closure along the way. I know as a reader I was frustrated by the Wheel of Time books that way. I loved them, mind you, but after investing time and emotion into thousands and thousands of pages only to not know what’s going to happen and when, I got frustrated a lot. So when I planned out this series, it was (and is) always my intent to finish major story lines up in parts as I went along. So my outlines have a major story arc that binds them all, but each trilogy will have its own story arc, and within that, the arcs for the three parts of it. Hopefully that makes sense.

Anyway, as I said, I’ll give that its own post in the future, and talk about what’s up for the next part of The Galactic Mage series and, more specifically, the next trilogy. For now, I’m just stoked that Hostiles is finally about to be out and, with it, the culmination of a long and wonderful major journey for me as a writer. This release is sort of the finishing up of my opening trilogy as a writer, the completion of three early phases, if you will: a phase of amateurism and hobbyist through a phase of learning and study, and finally into a stage where I could do it professionally. The first trilogy of The Galactic Mage series is the tangible completion of that journey for me. Hopefully many years of new writer arcs are still to come for me as a storyteller as I continue to learn and grow, but for this moment, I am just very happy to see this trilogy has finally come to life and that it has found wonderful people like you who were willing to take the time to read it. I can’t even explain how gratifying and wonderful that is.

Plus, I’m unendingly pleased with how the story turned out. I hope you all will enjoy Hostiles and the trilogy as a whole story once this third book goes live. I believe that with the third book out, many of the things people asked about and commented about and wondered about and even complained about will all become clear, and in that clarity, at least in my dream scenario, I hope The Galactic Mage trilogy will be a “place” where readers, where you, can go when they feel alone or when they simply want to get away. I hope it can be a place to escape and go find people to spend time with, time and again. Good people, who, while flawed, ultimately make us feel good about ourselves and our humanity. That is my dream scenario. To have made a place of joy.