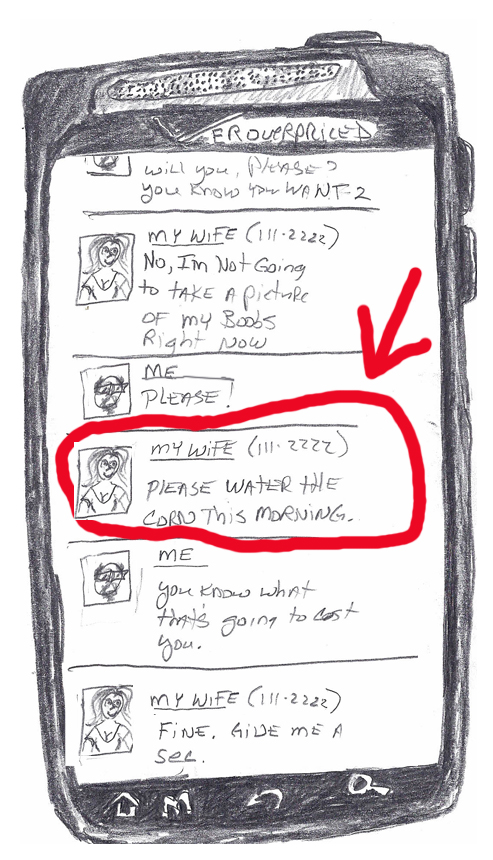 So there I was, minding my own business, checking some emails and getting ready to get to work on revising my book, when I hear the bzzz bzzz of my phone sitting next to me. So, I pick it up, and what do I find? I find this seemingly innocent text from my wife that reads, “Please water the corn this morning.”

First, to answer the questions you now have: 1) Yes, we are growing corn, and (if you know me) 2) No, we are not growing it in the front yard again—that was only done to irritate the neighbors last year because that sort of thing amuses me (and trust me, they deserved it).

So, there I am trying to work on my novel, and my wife texts and asks me that seemingly innocent question. Most of you will note the please at the beginning of it, and, from that, you’ll start projecting sweetness and other nice ideas and conceptions upon how you understand and imagine the woman who is my wife. You’ll probably assume that she is thoughtful, having thought of the corn out there languishing in the heat, and that she is polite with that please thing, etc. 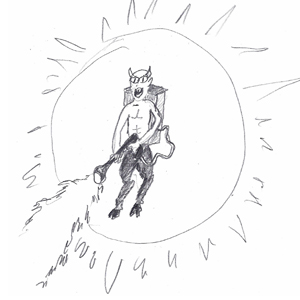 For starters, the sun burned down like the flamethrower of hell that morning. It hung in the sky like a bloated volcano, pregnant with molten heat sent to ravage the Earth with demon-spawned fury. Talk about languishing in the heat, I stepped out into the back yard, intent on doing this boon for my beloved, and that odious heat hit me like a monstrous weight dropped from the height of eternity. It fell upon me like the crushing fist of an angry fire god bent on decimating me beneath its infernal wrath and hate and stuff. It was horrible.

I staggered out beneath that oppressive solar blaze, barefoot of course, for, like Altin Meade, I eschew shoes whenever possible, and I found that the Earth itself was in collusion with my would-be assassins.

Now, before I go on, it should be known that our back yard is not a Stepford yard, and we don’t buy into the outdated belief that there is some value to having a pretty green lawn, evenly cut and conspicuously watered. If this were Versailles, sure, I can see it. But it’s not. It’s Chez Moi, and I don’t feel like dumping all that water—the most abundant resource on Earth, yes, but also the one that I have to pay outrageous rates to the county for despite said abundance. But, I digress. The point being, we don’t have one of those conformist lawns back there; we plant what we want to plant, and mow down the wild grass in between. Sometimes. Again, etc. 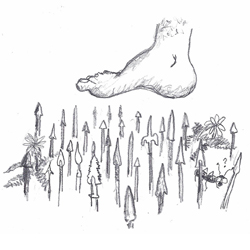 Anyway, so there I am, walking across the mown wild grass (a.k.a. weeds) in my bare feet. The spears of the remnant natural lawn drive into the soles of my poor paws like so many iron nails and shards of broken glass. The weeds… the grass, when it’s green and new, is soft and bendable, pliant, even luxurious to walk upon, but when mowed down to an inch or so, and dead, it hardens into yellow straw like steel spikes. It becomes a field of tiny spears jutting up from the soil like the bottom jaw of an animal that eats nothing but tender writer’s feet (the feet being tender, not the writer, obviously) (Sort of).

So there I was, trying to be a nice obedient husband and do this thing that my dear wife asked of me, even though I am not a gardener or a farmer by nature—born on a farm, sure, but not a farmer by trade or personal joy. I only farm for spite or humor, as last year’s corn will attest, never else-wise, as doing so constitutes far more labor than a muse-inspired vessel such as myself and my beer-inspired physique should be subjected to… etc., yet again. So out I went to do this deed, to throw some water down upon the corn, in keeping with my love for my wife and my general sense of pseudo-agrarian domesticity.

No sooner was I out the back door when BAM, the sun was there disgorging it’s hate, beating down on my bald pate like a heated frying pan while, at the same time, my feet are being chewed up and destroyed by the angry Earth with its mighty straw-grass teeth. I hadn’t even turned on the water yet and I was nearly annihilated.

The hose from which the water was to come was strung all the way across the yard, forcing me to traverse what seemed nothing less than a Serengeti wasteland of those weed-wrought spikes. They tore into my tender soles mercilessly and, sometimes, the bite was so severe I’d stagger in my effort to move off of whatever burr or bramble I had stepped upon. I felt like a man trying to tightrope walk a razor blade so sharp were the obstacles in my path. I also had to be on the lookout for snakes and insects that bite or sting, obviously adding to the danger of my circumstance. I suddenly understood what it must be like to be an Army Ranger or a Navy SEAL making my way across enemy territory.

But then, after stepping on a particularly vicious spike that threatened to pierce through my foot entirely I am sure, I stumbled some. Well, apparently, in my Navy-SEAL-like spasms to keep my balance, I may have flailed my arms a little more than was expressly tactical in a survival-mode kind of thing. As I staggered sideways, one of my waggling arms swung up and, with the whip like motion of a limp wrist I suppose if I’m being honest, I slapped a bee flying by.

I can make the argument here that, in that moment, I actually deflected the opening salvo of an attack sent by the forces of evil to destroy me—the thing some might call a spasm of cowardice really a combat reflex… (would another etc. be too much here?).

Now I know the cynics out there are rolling their eyes or making some sort of huffing noises (or clicking the back button, but whatever), but I assure you, this was not just any bee. If you read the title of this article, you will realize that this was a nuclear mutant bee. Those are not to be trifled with. Just look at the police sketch (I consider my ability to sketch as a cop very similar to my ability to fight like a Navy SEAL).

This bee was huge and evil like few of Satan’s minions are—I mean, all his minions are evil, and many huge, but this one had it all in freakish proportions. It was the kind of creature that is capable of tearing minivans apart and eating the little children inside. And before you say, “Oh, now, come on, you exaggerator you. No bee is that big,” well, listen up. Many of you may not know, but I live in the south part of the Sacramento area, and there is a decommissioned nuclear facility nearby called Rancho Seco. You can see it on a clear day from here. (You can Google it if you think I am lying.) And guess what, this bee clearly came directly from there to my yard. It was huge, the size of DC-10, but with huge muscles, shoulders like The Rock—even though he likes to be called Dwayne Johnson now (he Dwayne, not he, the bee… besides, bees are chicks mostly anyway). Anyway, it was all gristle and fury. I think it was wearing a wife-beater t-shirt, but I didn’t have time to look. All I know is that it was filled with radiation energy and burning hate, and it was flying by when I accidently staggered in my own backyard and smacked it with my wrist while trying not to fall as I was under siege by the Earth spears of my natural lawn, upon which I would never have trod were it not for my wife’s insidious text message.

Well, being a mutant bee, it did not appreciate what it mistook to be my attempt at a beat down. Mutant bees are very sensitive, like most hyper-masculine manifestations (imagine how much worse it is when a female develops that particular aspect of masculinity), and so it decided that I should be given a proper beat down instead.

So it attacked me. It buzzed my head like a thousand Japanese zeros trying to sink my battleship. I, being the intrepid outdoorsy sort (cough), would not put up with that sort of thing, so of course I ran like a little girl, my chin tucked to my chest and my arms flailing a spastic barrier of flying fingers and swatting hands. That would show it.

The sun, still blazing above, must have sparkled fabulously off of my wedding ring, the diamonds painting the sky will the laser light of prismatic brilliance, creating a lightshow around my particular defensive strategy. I was sure victory would be mine right away.

But that F-ing bee wouldn’t leave me alone. All across the lawn I ran. Bzzz, bzzz, bzzz, came the attack. “Eeeeek,” and “Aaaagh,” came my warrior screams. The iron jaws of the lawn devoured my feet as I pranced and fretted back and forth across the goddamn lawn. The stupid F-er wouldn’t go away.  It was on me like a fat girl on a chocolate-covered copy of 50 Shades of Grey.

So all I could do was run. I ran and ran, obviously doing Navy SEAL arm flails in my own defense and trying to stun it with the piercing shrill of my girlish wails, but, I was having little luck.

That’s when I ran into the wasp.

It seems that, in the course of my noble combat strategy, the peals and spasms of my fighting-retreat carried me into a wasp’s path and, whap, I hit that F-er with an arm-flail, too.

Which made it obvious that the goddamn mutant bee had called in reinforcements! Its evil allies had come from across the field to further perpetrate the assault. This was an affront to decency! The cabal was clear. My wife had planned all of this. “Water the corn.” Please! As if that was ever the real concern.

So around and around I went, lap after lap around the yard, the pair of them ringing me like a devouring plague, a swarm of stingers and grasping mandibles, long fangs dripping radioactive poison.

Needless to say, I only survived thanks to my ninja speed, Ranger guile, and Navy SEAL agility. At length I finally won the day, as, eventually and obviously intimidated, both assailants finally went away.

I watered the stupid corn and came back inside where reasonable people reside.

My feet are still sore.

But that’s okay. I learned something. My wife with her sweetness and her polite pleases aren’t fooling anyone anymore. I am hunted. But I am ready. Now. Etc.